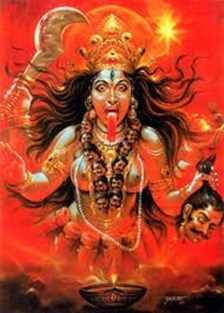 She Who Is All – The Goddess of Ten Thousand Names

“By you this universe is borne, by you this world is created

You who are eternally the form of the whole world,

at the time of creation you are the form of the creative force,

I was unsure of which Goddess to choose for the January column.  December was fun in choosing Winter Goddesses.  January is cold and dreary in most of the northern hemisphere.  Should the Goddess be all about the light?  Apparently not.

I have been having Kali visit me in the quiet of my mind these past few months, and She got me to thinking.  The New Year is a time of change for many people.  Most run around making resolutions that, honestly, don’t make it through the first month.  Some make the same resolution every year — I’m going to give up smoking, I am going to exercise everyday, and so on.   The thing we most want and what we focus on are our obstacles, and THAT, is where Kali comes in.  She will help you destroy those obstacles and free you to make the changes you wish.

Her stories are bountiful.  Born from the brow of Parvati, Kali killed the demonic forces that were threatening.   She danced with the Lord of the Dance, Shiva, and it is said the dance grew wilder and wilder, and as the dance continues, it will one day shake the world to pieces.   She killed other demons during another battle,  and it is said that after they were dead, exhilarated, laughing and roaring,  Kali happily drank their blood and began to dance wildly, hence Her dance of death and destruction.

She is seen as a Dark Goddess, as she dances the dance of death and destruction, but She is also keeper of time and will be there when new things emerge from Her destruction.  When you see Her, there is no mistaking Her.

She wears a necklace of skulls around Her neck, She hold weapons in her numerous hands.  Her tongue protrudes from Her mouth.  She can be terrifying to behold and to work with.

However, She is worshiped by many as the Mother Kali or Kali Ma, in which Her worshipers surrender to Her utterly.   Abrahim Khan, an anthropologist, said that “to belong to Her, the worshiper must surrender not just the intellect, but the entire self, that is the mind, the body.”   To me, that is the key to working with Kali.

The following is my meditation from a *workshop that I have taught, Healing Dance of the Kali Dakini.***

“Sit quietly, breathing deeply, closing eyes.  Visualize yourself in darkness, a cave, deep within the womb of the Earth.  Breathe into your sacred feminine energy.  Now, open yourself to She, who is Kali, who is both fearsome and

spiritually liberating, offering you healing from your emotional wounds.  Sense Her in whatever way you wish and allow her to see you in your entirety, the good and the bad. Let your breath connect to her.  Draw her presence into your body, into each part of yourself.  As you do this, allow the release of all obstacles, accepting the freedom that She offers.”

This is a lovely song for a Kali meditation:

I also recommend the Dance of Kali, which I also do in my workshop.  The idea behind this is to just dance, allow your body to move freely without inhibition.  As you dance, visualize yourself healed – a blissful Kali Dakini dancing in the light in service to Kali.  (Note: a Dakini translates as “sky dancer”.  She is a spiritual disciple of Kali, the creative personification of the Divine Feminine)***

I would recommend lying down and relaxing with long deep breathing for at least 10 minutes after the above meditations.

That is Kali.  You can reach me at MysticalShores at gmail.com if you have any questions or (nice) comments.

May Kali bless you on your journey!

The New Book of Goddesses and Heroines by Patricia Monaghan