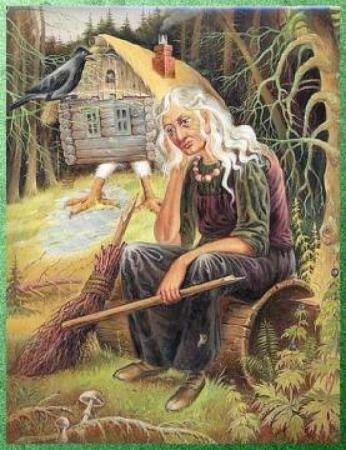 In Slavic and Russian folklore, Baba Yaga is the old woman of autumn. She was a fearsome witch-like woman with iron teeth, who rowed through the air in a mortar, using a pestle as an oar. As she travels, she sweeps away all traces of herself with a broom made of silver birch.

She is the epitome of the fairy-tale witch, who lives in a hut deep in the forest, this hut having the legs of a chicken and would spin around and around. Its’ windows are its’ eyes. This hut is surrounded by a fence on which skulls are placed, with eyes a-blazing. She would scare people with just a look, and her appearance would cause the wind to blow wildly, leaves blowing helter-skelter. It is said that her traveling companions were spirits. She has bodiless pairs of hands that act as her servants and could call on the White, Red and Black Horsemen. She was also called Baba Yaga Bony Legs, as, even though she had a ferocious appetite and ate those who did not complete the tasks she had given them, she was extremely skinny. She had two older sisters, both of whom were also known as Baba Yaga. She would sleep sprawled out on her stove, which was the length of the hut and her long nose would hit the ceiling as she snored.

Baba Yaga would always ask visitors if they were sent to her, or if they came of their own free will. She had no power over the pure of heart or were protected by love or virtue.

One of the most famous stories of Baba Yaga was about a young girl named Vasalisa.

Vasalisa was the daughter of a merchant, whose wife dies when the girl was 8 years old. While on her deathbed, the mother gives Vasalisa a small wooden doll. She told her that if Vasalisa fed it a small amount to eat and drink if she were in need, then the doll would help her. She did so and the doll comforted her. Eventually, as men will do, her father remarried, to a woman who had two daughters of her own. This woman was very cruel to Vasalisa, who was always able to do all of the chores assigned to her, with the help of her little wooden doll. Her stepmother would not allow her to be married before her own daughters and send all suitors away, as they had no desire to wed Vasalisa’s step-sisters.

On a day that Vasalisa’s father left on a trip, the stepmother sold his home and moved them to a hut in the forest, which was very dark and gloomy. She gave each of the girls a chore to do and put out all the fires in the hut, except for one candle. The older step-sister sent Vasalisa to see Baba Yaga to fetch more light. With the help of her doll, she knew where to go, and so she went.

As she traveled she passed a man, dressed in white, on a white horse; then a man dressed in red, on a red horse. She soon came to a house which stood on chicken legs, whereupon she noticed that the fence was made with bones. A man dressed in black on a black horse, then rode past here. She was frozen with fear and so Baba Yaga found her when she returned home.

To earn the fire, Baba Yaga told Vasalisa that she must perform certain tasks or she would be killed. Vasalisa cleaned the house, the yard, washed Baba Yaga’s laundry, cooked her food and on and on. Vasalisa was exhausted and scared that she would never complete the tasks given to her. Her small wooden doll once again came to the rescue, completing the work while Vasalisa slept. Each of the horsemen rode by again, and when Baba Yaga returned home, she found nothing that she could complain about. She allowed Vasalisa to ask questions of her, and when she inquired of the horseman, Baba Yaga explained that the white one was Day, the red one the Sun and the black one, Night. She also asked Vasalisa how she was able to complete her chores and was told that it was by the blessing of Vasalisa’s mother. Baba Yaga threw Vasalisa out of her home, not wanting any blessings. She gave Vasalisa a lantern made out of a skull that was full of burning coal for her family. When she returned home, she learned that no one in her family had been able to light any candles or fire while she was gone. Vasalisa’s step-mother and step-sisters were burned to ashes by the coals in the skull, and so Vasalisa buried the skull so that no one else would be harmed by it again.

In origin, Baba Yaga was an ancient Birth and Death Goddess, whose death in autumn, led to new birth in spring. She lives in the last sheaf of grain harvested and whichever woman would bind that grain would bear a child that year.

She is the Arch-Crone, the Goddess of Wisdom & Death, who brings the death of ego, the re-birth through death. Baba means “grandmother” or “old woman”. She is the Eternal Mother. She is the Earth Mother, wild but kind, as the Earth is in both it’s gentle rain and it’s furious hurricanes. She is the Guardian to the Fountain of the Waters of Life and Death. She is the Ancient Goddess of Old Bones. She brings us from our darkness to Light, death to re-birth.

She is the Wise Hag, giver of wisdom and magic gifts. She is all-knowing and all-seeing and shares her gifts with those who are brave enough to ask. She keeps her promises to those who come to Her.

She is the Crone within the Triple Goddess.

As Goddess, Her themes are the harvest, prosperity, rest and giving thanks, bringing us awareness of the Wheel of the Year. You can bring Her prosperity to you by bringing a wreath of harvest items into your home.

Her symbols are corn, sheafs of wheat and wild flowers.

Her season is Autumn and She is the Waning and Dark Moon. Her tree is the silver birch.

Her festival is celebrated on January 20th.

The following is an excerpt from The Goddess Oracle by Amy Sophia Marachinsky, with artwork by Hrana Janto.

“I walk in the forest

and speak intimately with the animals

I dance barefoot in the rain

I travel on pathways

that I make myself

and in ways that suit me

my instincts are alive and razor sharp

my intuition and sense of smell are keen

I freely express my vitality

because it is natural

It is what needs to be

I am the wild joyous life force

Come and meet me.”