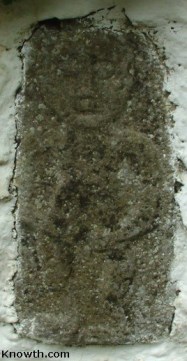 What better representation of the Goddess for February than Sheel-Na-Gig?

All over Europe, primarily Ireland and England, adorning castles, churches, sacred sites, you will find carvings in stone of the beautiful Sheela-Na-Gig, a big smile on her face, squatting knees apart, exposing her powerful vulva. It is believed that these carvings were done during the Neolithic and Paleolithic eras. There is still and old energy that lies within these carvings.

While many find Her akin to a gargoyle, or a figure of lust. Many women, though, believe her to be an ancient fertility figure and a representation of the Mother Goddess.

The term “gyg”, in Norse, means giantess or a deified female, aka Goddess. It is thought that these carvings were meant for protection and to ward off evil, which goes a long way toward understanding their appearance on ancient churches.

The vulva is a holy symbol of birth and life; representing regenerative powers of an Earth Mother/Goddess. The vulva of Sheela-Na-Gig is in the shape of a triangle, another hint that She is a representation of the Goddess. The triangle is a symbol of the three aspects of the Goddess – Maiden, Mother and Crone – the full cycle of a woman’s life (yes, I am not including all of the new additions of Queen, etc.)

It is thought that graves were built in the shape of the Goddess and that Her vagina was the passageway to regeneration and rebirth.

I believe that it is most likely unknown how many of these carvings there are, but this link will give you an idea of those that are in Ireland: http://www.irelands-sheelanagigs.org/

This article researches those in Southern England: http://www.sheelanagig.org/wordpress/category/southern-england/

Some of these carvings may be seen as lying on their side or upside-down, which indicates re-use of the stone which originally held the Sheela-Na-Gig carving.

Many of these carvings were taken down and destroyed with the growth of the church, as well as the beginning and rise of patriarchy. It is believed by many that these carvings of Sheela-Na-Gig gave rise to the demonization of women, and of women being portrayed as an ugly hag or crone.

While there are women who find these carvings grotesque and obscene, women who “know”, see Her as an invitation from the Goddess to explore and delve into their own divine feminine. She is the gateway to new adventures, new projects and new paths.

Sheela-Na-Gig is the invitation, the gateway and the re-birth of women who have the courage to really see Her, choose to delve into Her Mysteries and be reborn, knowing of their own Goddess power within and without.

With the fast and rampant rise of patriarchy, women were reduced to nothing but one who serves at home for their spouse, and as sex objects, which is how many see Sheela-Na-Gig. With this reduction of the powerful force of women and the Goddess, women lost their power.

We, as women, need to remove ourselves from the yoke of patriarchy. The time is now for women to rise up and reclaim the power of the Goddess and the power that is held within them; rise up and proclaim “THIS is our power”.