Flower face. Innocent. Delicate. Brought into being without consent, without question, without knowing.

Her son got a name, Llew Llau Gyffes and was armed by his mother through trickery and deceit. When he wanted a wife, one was made for him from oak, meadowsweet and broom, among other herbs and flowers. Blodeuedd, as she was originally named, was made by the magician, Gwydion and Math of Mathonwy, the king of Gwynedd; made by charms and enchantments.

Other than his wanting a wife, he cared nothing for Blodeuedd; his goal was to defy his mother and break her curse. His feelings were what mattered and what he concerned himself with. She was wanted only to make a point to his mother and to do what tradition dictated in having a wife.

Brought into this world without a thought to her, they are married. She was then left alone. Think of how she must have felt, brought into existence and left in a life and a world that she did not comprehend. 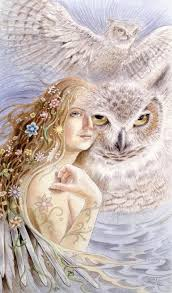 While Llew Llau is away, the castle is visited by a neighboring lord, Gronw Pellyn, whom she invites in. They both immediately fall in love, one with the other. Gronw Pellyn, *sees* her, really sees her, as a woman and not just a means to an end.

The invites him to stay and stay he does, for three nights, bonding and consummating their love.

Gronw wants Blodeuedd and they hatch a plan whereupon she will find out how her husband can be killed. She gets the information from Llew Llau and lets Gronw know where he should be hiding, which day and which location. Gronw hits Llew Llau with a poisoned spear; he turns into an eagle and flies away. Gronw took possession of the land and was with his beloved.

Gwydion, the magician who was Llew Llau’s uncle, searched high and low until he came upon his nephew and he was transformed back into a man and brought back to health, whereupon he wanted revenge.

His wife, Blodeuedd, fled with her maidens, who because they kept looking back, all fell into a lake and drowned. This lake is Lynn Morwynion, Lake of the Maidens.

When they caught up with Blodeuedd, they did not kill her. Instead, Gwydion turned her into and owl and renamed her Blodeuwedd, which means owl. Llew Llau got his revenge upon Gronw by killing him at the same location where Gronw tried to kill him.

When Blodeuwedd is thought of now, she is almost always remembered as a traitor, betrayer and cheat. But is she, truly?

How is that even a choice. You choose your path or, eventually, you wither and die. There is no other choice for her to make, and so, she does. She shows courage, and the strength of her convictions and confidence in herself. So should we all.